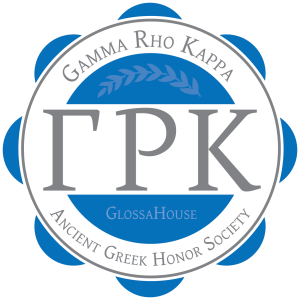 Recently, I had the opportunity to teach a beginning Greek class and began by looking at Romans 1:16. To that point, the students had learned the alphabet, the Present Indicative endings, the article, a handful of conjunctions, first and second declension nouns, and the Present tense of εἰμί. In Rom 1:16, I was surprised by how much they were capable of recognizing in the verse. It was a fun way to begin class.

Here is the text with some coloring coding from a visual filter I created within Logos Bible Software (blue are adverbs, green conjunctions and particles, purple prepositions, and red non-Indicative moods—there are other colors not found in this verse).

Rom 1:16 For I am not ashamed of the Gospel; for it is the power of God for salvation for everyone that believes, both for the Jew first and for the Greek.

It is standard to understand that Rom 1:16 belongs to the thesis statement (1:16-17; however, I would maintain that the thesis extends from 1:14-17). Indeed, the verse encapsulates much of what Paul will argue in the following chapters. It centers on Paul’s positive affirmation of the Gospel, although his affirmation comes as a denial of any shame that he might have concerning it. By stating that he is not ashamed, he thereby implies that he is rather darn right proud of it. (The rhetorical figure used here is called litotes.) The next statement beginning with γάρ for indicates the reason why: because the Gospel is the power of God for salvation. The ideas expressed here are naturally prominent since they concern the core of what people in the Greco-Roman society longed for: power, connection to God (or gods), and salvation. A book that treats this is Ramsay MacMullen’s Paganism in the Roman Empire (New Haven: Yale University Press, 1981).

Thus far, the Greek sentences have been fairly straightforward. However, the end of 1:16 explodes with emphatic and marked elements that pack quite a punch. First, the παντί “everyone” entails what I call quantitative emphasis that here stresses the inclusive scope of those potentially impacted by the salvific power of God in the Gospel. This inclusive scope of the reach of the Gospel re-affirms the Pentecostal event in Acts 2 and Peter’s quoting of Joel 2:28-29 there. But Paul is not yet finished. He could have stopped here and his message would have been clear. However, he provides additional specificity by using an appositional statement in which two ethnic recipients are specified: Jew and Greek. The construction of apposition thematically highlights these two groups. Why? Indeed, Paul prepares for his subsequent argument where these two groups reoccur explicitly several times in the next chapters (2:9-10; 3:9; also 10:12).

However, here in 1:16 we must also observe the adverbial modifier πρῶτον first, which also conveys quantitative emphasis in terms of sequential “ordering.” With this single adverb Paul encapsulates the story of salvation history in which God first revealed himself to Abraham and his descendants, but always with a view to blessing the nations. Then, Jesus came as the Jewish Messiah. However, Jesus is also the Messiah for the entire world, for everyone that believes. The παντί expressed that point as we have already seen. However, a further type of emphasis is seen in 1:16 with the use of τε … καὶ both … and. This pairing of particles signals a type of correlative emphasis with the τε marked for “+sameness,” not of identity but here of equality of opportunity (see Long, Koine Greek Grammar, 275). Although there was a historical sequence to God’s salvific plan––the “firstness” for the Jews––Paul affirmed in Rom 1:16 that there is now an inclusive scope––the “allness” that reaches broadly into the Greek speaking world. Indeed, 1:16 encapsulates quite succinctly what Paul argues in the rest of Romans.

I am an incoming Ph.D. Student at Asbury Theological Seminary.

Due to the COVID-19 outbreak and Asbury Seminary’s response, https://asburyseminary.edu/news/updated-coronavirus-response, all Gamma Rho Kappa events scheduled for March and April have been canceled.

Also due to the COVID-19 outbreak, all Spring 2020 Paideia groups are suspended until further notice.